Olive oil has played a key role in the cooking of Mediterranean cultures since antiquity, laying the foundations for what we refer to today as “the Mediterranean diet”.

Its use in cooking has four main forms, those of: preservative, cooking medium, ingredient and spice (Peri, 2014). This article focuses on the use of olive oil, and in particular extra virgin olive oil, as a cooking medium.

As a cooking medium EVOO presents many different functions, such as the transfer of heat from the source to the food, that of a lubricant preventing food from sticking to the cooking surface, while adding flavor, crust and giving our dish a more appetising appearance (Peri, 2014)! 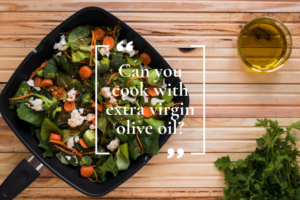 In general, it is an extremely healthy oil for use in all types of cooking and there are many studies, both existing and emerging, that report the positive correlation that exists between cooking and olive oil. This is of course due to the high levels of antioxidants (some of which are found only in EVOO) but also the ability of the oil to retain its specific “healing” properties, even after cooking the ingredients (Samaniego et al, 2015).

TRUTH (BASED ON SCIENTIFIC RESEARCH)

Choosing a certified and high quality EVOO is important to ensure high oxidative stability and safety during cooking. In our e-shop you will find world leading EVOO, with numerous awards! Choose what you want and continue the thousands of years of tradition of cooking with extra virgin olive oil while you enjoy cooking your food! As we have analyzed in our previous article, there are numerous studies that claim that olive oil is a protective and beneficial food in a healthy diet. It is extremely versatile and can be used in most forms of cooking. Thus, it is not only safe, but it is also beneficial for our health, in addition to the excellent taste it offers in our food!

[1] The smoke point of a fat substance is the temperature at which the fat substance, when heated, begins to smoke continuously. We should not use any fat for frying at the point of smoke or at a higher temperature. The reason is that the ingredients that decompose due to high temperature have an unpleasant odor and are harmful to our health, as the oxidation that is caused allows the creation of free radicals that are negative for our health.