26 Aug Polyphenols in Olive Oil: Their beneficial effects in health

Polyphenols in Olive Oil: Their beneficial effects in health

The cultivation of olives is an ancient practice and coincides with the expansion of the cultures of the Mediterranean. In Greece, the olive tree has been cultivated since the beginning of agriculture and has played an important role in all aspects of human life. It has influenced humanity on both a historical and cultural level and for these reasons it was the tree with the richest symbolism.

Nowadays, olives are grown not only in the Mediterranean countries, but also in countries such as South Africa, Australia, Japan and China. This results in olive oil being an important part of the diet of people from all over the globe. 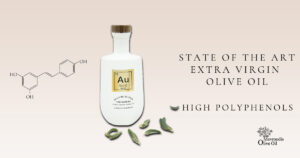 The knowledge about the value of olive oil is expanding and over time more and more medical researches worldwide prove that olive oil is superior to other vegetable oils, while highlighting its functional and protective properties concerning the human body. It is fully established that olive oil enhances health, while at the same time it works “therapeutically” against chronic diseases that afflict us.

These beneficial effects of olive oil on human health are attributed to both monounsaturated and unsaturated fatty acids, as well as a number of phenolic compounds, called polyphenols (Cioffi, et. Al., 2009). These are to some extent responsible for the organoleptic and nutritional properties of plant foods. For example, the astringent and bitter taste of foods and beverages depend on their content of polyphenolic compounds while protecting olive oil at high temperatures.

Polyphenols, as mentioned, are particularly beneficial for the human body, and their main actions are as follows:

At the same time, they provide other benefits, such as skin and hair health due to the antioxidation of cells and many vitamins, lowering blood pressure, a positive effect on the proper development of children, delaying the aging of cells.

Fresh and properly processed unheated olive oil with unheated and water-free cold pressing, is rich in polyphenols. Green gold or liquid gold (Brewer & Kellow, 2018), as unheated olive oil is called, guarantees abundant benefits to our health. Greece, with its temperate climate and fertile soil, produces the best unheated olive oil in the world and for this reason it is no coincidence that it plays a leading role in the Mediterranean diet.

Based on the above, the very important role that olive oil and its polyphenols play in human health becomes clear. It is a great fat in the human diet with undoubtedly excellent biological and nutritional value and for this reason it should be an integral part of our eating habits.

Guided by its invaluable nature in nutrition, health and culture, the Mavroudis family, with the preparation of its pure products, continues to honor in the best way this living heritage, this gift of nature! All our products are produced with the process of cold pressing and with great attention and emphasis on detail, exclusively in the olive mill of our company in Vraganiotika, Corfu.

You can find our product with the highest polyphenols at our e-shop!