11 Apr THE FLOWERS OF THE OLIVE TREE.

THE FLOWERS OF THE OLIVE TREE

This is when the new leaves appear, and soon afterwards the flower buds follow. These are clustered 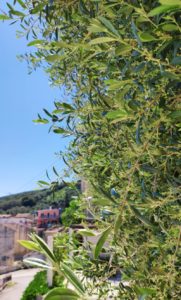 together in an inflorescence similar to a tiny grape, locally known as mignola. This stage (in Italian, mignolatura) peaks in mid spring, when the flower clusters are fully expanded. They do not open, but are clearly visible and fully formed.

Only at a second moment, from mid May to early June, according to the variety and the climate zone, will flowering occur. The blossoms are small, white and unscented.

The number of flowers that turn into fruit is quite low, generally less than 2%. It is important that the olive tree should suffer no water stress before and after blossoming, although abundant rainfall can
be equally harmful: the rain prevents the pollen from spreading in the air and might even cause its rupture due to excessive hydration.

According to a popular saying, if the flower clusters form in April, the plants will yield a barrelful of oil, if in May a bushel but if in June just a fistful.